The high technology of the Minoans!

By VAGWednesday February 16th, 2022No Comments 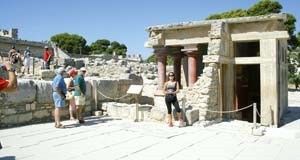 A photo exhibition will document the … high technology of water resources and liquid waste in ancient Crete!

The exhibition will be held in parallel with the International Conference on Technological Water Resources in Ancient Cultures organized by the International Water Company (IWA) to show the advanced hydraulic and sanitary techniques used by our ancestors in water management.

Minoan Crete and all of ancient Greece had developed such water supply systems, constructions and uses of baths and other sanitary facilities, as well as drainage and disposal systems of liquid waste and rainwater.

The exhibition will take place from October 24 to November 4 in Heraklion with co-organizers the Prefecture of Heraklion and the Hellenic Photographic Society of Crete.

The exhibition will feature 70 photographs from eastern, western and central Crete covering the Minoan to Ottoman periods.

Archaeological and other evidences indicate that in Crete, during the middle Minoan period, advanced hydraulic and sanitary techniques were applied in the water management of the Minoan settlements. These include the construction of aqueducts, wells, cisterns and other hydraulic technologies, water supply systems, the construction and use of baths and other sanitary facilities, as well as drainage and disposal systems for wastewater and rainwater. The hydraulic and architectural operation of the water supply and sewerage systems in the palaces and settlements are considered as one of the most remarkable features of the Minoan civilization. These systems were so advanced that they could be compared to the corresponding modern systems, which were introduced only in the second half of the 19th century in European and American cities.

This photographic exhibition attempts to depict and record important water supply, sanitary practices and technologies in the ancient Cretan cultures. Particular emphasis in this exhibition is on Minoan civilization, which seems to be the beginning of the development of hydraulic and sanitary technologies, such as aqueducts, cisterns, wells, water supply and sewerage systems and the use of water for recreation and urban development. environment.

Aqueducts. More than 40 aqueducts are known in ancient Crete from the Minoan to the Venetian period. The first aqueducts appear in the Minoan era, which are probably the first in the history of mankind. Such are the aqueducts of Knossos, Malia, Tylissos and others. Several aqueducts were built and operated during the Hellenistic and Roman periods.

Cisterns. Five documented cisterns are known from the Middle and Late Minoan period (2000-1200 BC). These are two in the Myrtos Tower and one in the central square of the palace of Zakros, in Archanes and in the house of F. Eastern Crete until the middle of the last century.

Wells. The first such technologies were also developed during the Middle Minoan period (ca. 2000-1550) in the area of ​​the “palace” of Knossos. The use of wells was more extensive mainly in Eastern Crete due to the limited surface water resources. Thus, in palaces and cities, such as Zakros, Paleokastro and Itanos, the use of groundwater was mandatory. Groundwater use technologies continued and were further developed during later civilizations. This technological development created an important tradition throughout Crete with the result that even today the water economy of the island is based on groundwater.

Other facilities. In the ancient Cretan cultures, other hydraulic installations were also developed, such as clay pipes of various cross-sections and dimensions, open or closed, lead pipes of various dimensions, inverted P-shaped stone pipes and built gravity pipes, mainly in gravity systems.

– The water supply of Knossos was based on underground and surface (springs) water resources. The water supply with drinking water (transport and distribution) was done with a network of closed clay pipes but with gravity pipes.

– Finally, the water supply of Zakros was based on underground water resources. A feature of the palace of Zakros was its wells and groundwater pumping equipment.