By VAGWednesday February 16th, 2022No Comments 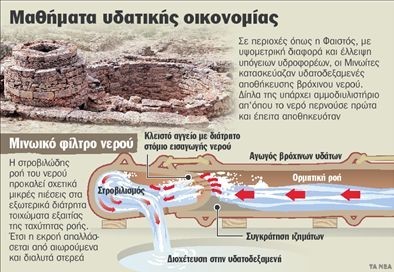 Aqueducts, cisterns, wells and all the so-called green and ecological solutions for the management of water resources were implemented in Minoan Crete. The technological avant-garde, if one examines carefully the Minoan settlements in Knossos, Phaistos and Zakros, looks like a return from the distant past.

“The settlements of the Minoans were better adapted to the natural environment and its changes, while the fact that they had all the comforts of water supply and sewerage is impressive,” NTUA professor Dimitris Koutsogiannis told “NEA”. “Comforts that developed countries experienced 150 years ago, were enjoyed by the inhabitants of the Minoan settlements three or four thousand years ago.”

The water supply in the cities of the Minoans was done according to their location so that there is the maximum possible exploitation of the waters. The first aqueducts found in Minoan Crete took full advantage of both the rainfall and the wealth of springs and groundwater. According to Andreas Angelakis, President of EUREAU and Technical Advisor of the Association of DEYA (Municipal Water Supply and Sewerage Companies) of Greece, the practices that followed are divided into three major categories. “At the site of Paleokastro in Eastern Crete, they used the groundwater with wells. This was also the case in Zakros. In these settlements, it seems that the technology of mining and water pumping was developed. In Archanes and at the top of Pyrgos, west of Ierapetra, there were the first cisterns in the world, while in Knossos, Tylissos and Malia the first aqueducts. The aqueduct of Knossos included water supply pipes 500-700 meters long, to cover the needs of the entire settlement for drinking water. There were still water filters. “Next to the tanks, they built sand refineries to treat the water before it was stored.”

The ancient Cretans may not have mastered automation, but the technologies remain innovative in their design because they were intended solely to serve the population. The Minoans could withstand periods of drought or siege because, as Mr. Koutsogiannis explains, in addition to communal drinking water – either with water pipes or public fountains – there were systems to ensure the sustainability of water in each house separately.

“What are now called hydraulic and environmental engineering, were already known in the Bronze Age”, points out Mr. Dialynas. “During the heyday of the Minoan civilization, serious innovations were made in matters of water supply and sewerage, that is, in the plumbing of the settlements. One of the most important is the use of the principle of communicating vessels for water supply. Water tanks, aqueducts and public fountains were designed and built. The water supply networks they built consisted of ceramic piping sections, which matched perfectly with each other without leaks. The layout of each piece was such that it functioned as a horizontal funnel. Therefore, if there were solids, they were concentrated around the large inlet diameter, thus avoiding deposits and blockages along the entire length of the network “.

What we have repeatedly seen happen when it rains in Attica and houses and streets are flooded, was better dealt with centuries ago. “Instead of drowning the rainwater, the city was used for primary and secondary uses, ie water supply and sewerage in the Minoan years. The same can happen today if we use the rainwater of the Basin for watering gardens and other secondary uses, even for the enrichment of the aquifer, instead of sending them to Kifissos and its tributaries “underlines Mr. Koutsogiannis. The first … toilet

The Minoans used the first water-flush toilet in history and sewage collection and disposal networks. Other well-known water resources technologies during the Minoan era were their use for recreation. Thus, the fountains-fountains in Knossos are known, the use of a central tank in Zakros as an aquarium but also for recreation.

Explosion in Syggrou: The damage inside the buildings is shocking

The sewage went to the crops!

“SEWERAGE NETWORKS, in addition to protecting public health, reveal an environmentally friendly wastewater management,” says Mr. Dialynas. “There are indications that in Phaistos the edible crops were irrigated with sewage from its sewerage network. palace. The Minoans did not have chemical analyzes of sewage; they may have known empirically that sewage is rich in nutrients for crops. However, it seems that they aimed to minimize the discharge of sewage into the environment “.

The truth for most hydrogeologists, agronomists and engineers lies in the transformation of agriculture from physical activity into a chemical, energy-intensive and water-consuming occupation. “This happened fifty years ago in developed countries and about thirty years ago in Greece.

“Until 1970 there was a sustainable activity in Greece, ie environmentally friendly. “With pesticides, spraying and oil burning, however, in combination with the reckless use of water mainly from the aquifer, it has become hostile to it.”

From 1750 to 1490 BC. the agricultural development of Crete was necessary to feed and increase its population. From the irrigation systems of this time the most famous is the lines (from the word linea which means straight line) and was located on the plateau of Lassithi. As Mr. Angelakis points out, “this is inferred from the Neolithic and Minoan settlements found in Papoura, Kastellos, Plati and Karfi, as well as the famous sacred caves at the top of Kronion at Trapeza and the Dikteo Cave in the Cold. There the numerous drainage channels and irrigation ditches intersect and create a remarkable shape. This technique is considered to have been later transferred to Central Greece “.

“PRIMARY but effective technologies for the treatment of drinking water were used to remove solids”, notes the chemical engineer Mr. Manolis Dialynas. “Essentially, they were clay pots with a screw arrangement, which forced the water to swirl at high speed. With the aeration of the water, the carbonates of the water were precipitated and deposited in the clay walls of the vessel, where the flow velocity was slower. In other words, we could say that in this way we had softening – removal of carbonate hardness “.